Occasionally, before doing a night out, people come round to our flat for pre-drinks. And occasionally they come for dinner too. The most I've cooked for to date was 15 - a terrifying task when in a kitchen not *really* big enough for the 6 it's given to, with a hob that takes an age to heat up and an oven that only works when it wants to. The way to avoid panic is to plan, and to make something that manages to be delicious, filling and easy all at the same time.

My solution is twofold:
1. Plastic plates and cutlery. Because it's all very well being green, but who wants to wash up for 15 people?
2. A savoury puff pastry tart with a potato salad and green leaves.


Lots of things can be done earlier on in the day, so when people start arriving you can swan around in your lovely dress having done your hair and make-up and avoid this situation:

- which is never good when it's only 8pm. With this particular meal, you can do the potato salad in the afternoon which is a big plus.

1. Start by washing the potatoes and cutting away any sprouting bits. Bring a large saucepan of salted water to the boil and then put the potatoes in. Bring back to boiling and cook for 20 minutes.

2. Allow to cool. Meanwhile, chop your spring onions and put into a large bowl. When the potatoes are no longer too hot to touch, chop them into small pieces and add them to the bowl too. Follow with the creme fraiche, mayonnaise and herbs, and season. Voila. This can now go in the fridge until you need it (though admittedly, it is nicer at room temperature - so perhaps take it out 20 minutes or so before you want to use it).

The tart is equally easy to make, and bits of it can still be done in advance.

1. VEGETABLE PREPARATION TIME. Wash and half the cherry tomatoes, de-seed and chop the pepper into smallish pieces, chop the red onion and the garlic and put them all in a baking dish. Season and drizzle with olive oil, then put into a preheated oven at 220°C for 15-20 minutes. This part could be done in advance, as if necessary you could then cover with cling film and come back to them later on.

2. Roll out your pastry on a floured surface. You want to get it approximately 1cm thick and as even as you can. Then, take a sharp knife and roughly score where the crust of the tart will be. This means that when the vegetables are added and weigh down the pastry in the middle, the bits around the edge are free to puff up to their heart's content. Score along the sides too - as this will help the layers to separate and also aid the puffing-process.

3. After letting the pastry rest for a couple of minutes, spread the area you want the vegetables to lie on with the pesto before using a slotted spoon to heap on the vegetables (the slotted spoon stops so much juice coming with them, and helps prevent a soggy bottom on your tart). Add the sundried tomatoes and sprinkle over the goats cheese - when I last made this meal at home I only used half a pack of the latter to avoid being accused of using too much cheese, but my sister said she would've liked more and I should've used the whole pack, so really it's completely up to you.

4. Tear the basil and sprinkle over, and then bake for about 20 minutes, until the pastry is golden and it's all looking good. Note: I think it says 15 minutes on the pastry packet, but you'll need a few minutes longer as there's so much topping. When it's done, you can garnish with a bit more basil just to add to the wow-factor, and you're ready to serve. 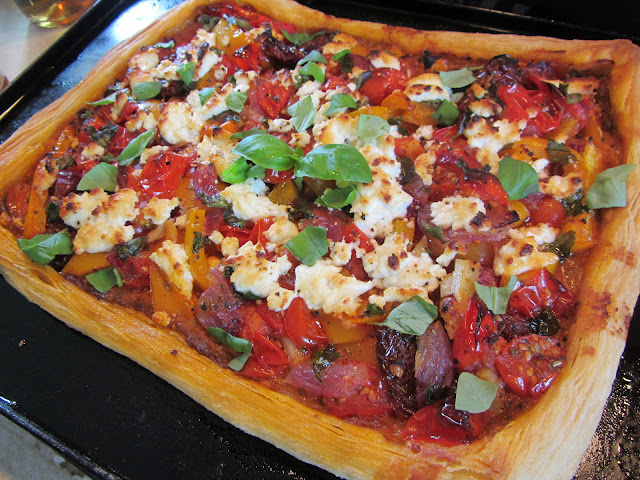 And as for the salad - buy yourself a few bags of baby salad leaves and whip up some Honey and Mustard Dressing during the day, and you're set. All done together, it gives you time to do this...

...if you want to. Feeding the 5,000 has never been so easy. Unless you're Jesus. But that would be a whole different blog post. 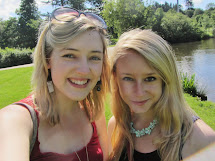